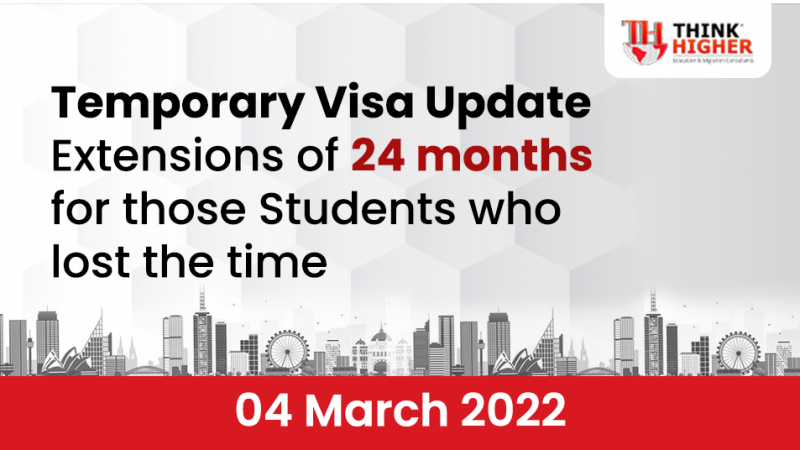 Temporary visa 476 is Extensions of 24 months for those engineering graduates who lost time due to border restrictions. This equates to the usual 18 months plus another six months in 476 visa.

Removing the limit on working hours across ALL sectors of the economy. To be reviewed in April 2022.
COVID-19 Pandemic Event Subclass 408 Visas
Temporary visa holders (TVH) with work rights will be able to access these visas at nil VAC for 6-12 months if they work in ANY sector of the Australian economy.
These New Arrangements are Only Available to TVH

These TVH will be able to apply for these visas up to 90 days before their existing visa expires and remain in Australia for up to 6 months if not working in a key sector or 12 months if working in the key sectors of:

The Australian Government considers the European Commission’s initiative to activate the Temporary Protection Directive will likely be an effective means to offer quick assistance to up to 90% of those fleeing the Ukraine. These people will be given temporary residence permits for up to three years in EU countries under the EC’s Directive. A further media announcement and legislative instrument have also been released.

The Prime Minister announced on 20 March 2022 that the Australian Government will make available a Temporary Humanitarian (Subclass 786) visa to all Ukrainian temporary visa holders currently in Australia and those who arrive in the coming months.

This visa will allow people to work and access Medicare and appropriate associated support services and will be valid for three years. School-aged children will also be able to continue their education.

The full media release is available on Minister Hawke’s website.

Migration Amendment (Ukraine) Regulations 2022 – F2022L00337 amends the Migration Regulations to extend certain temporary visas by 6 months from the date they would have otherwise ceased for Ukrainian passport holders.

Ukrainian passport holders who were in Australia on 23 February 2022 with a visa that was in effect and would cease before 1 July 2022 will have their visas extended by 6 months from the date they were due to expire.

Extensions were also be provided for accompanying family members on those visas regardless of citizenship. These extensions are permitted by the new Regs 2.05(A) and (B).

The relevant visas are:

This is a summary of this Legislative Instrument and Explanatory Statement, members should review these two documents in full before lodging applications for this visa.

This Instrument commenced on 22 February 2022.

The Department has a Ukraine visa support webpage that is regularly updated with information for this cohort of citizens.

Think Higher established in January 2014 with the aim to provide the best solutions to your needs in Education, Migration and Business.